Why Conventional Medicine is Failing at Chronic Disease 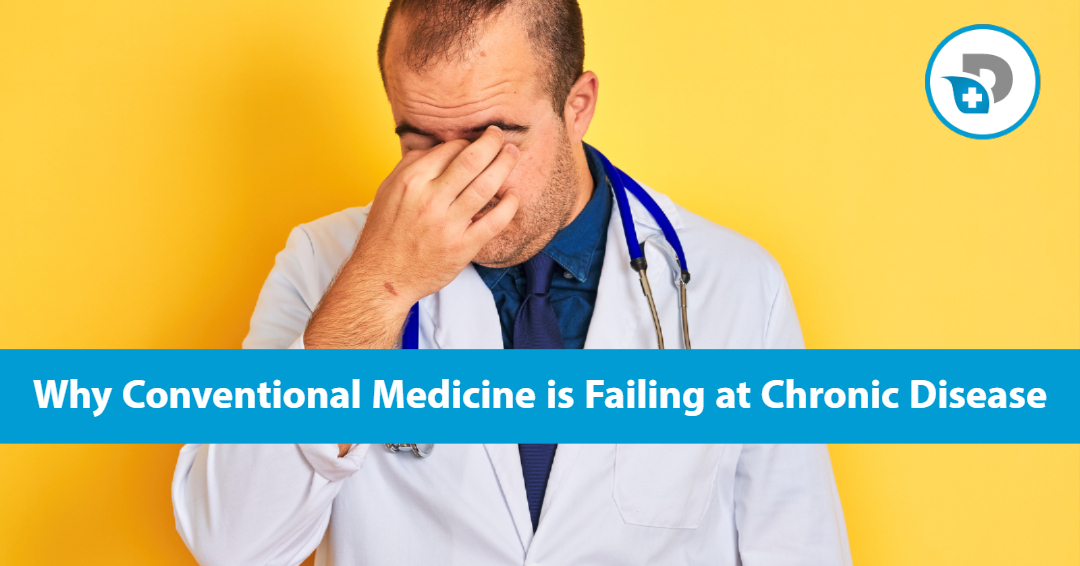 Let me preface this article by stating that I personally thank God every day that we have doctors, nurses and physicians trained at saving lives when a situation is critical.

However, conventional medicine is not the best approach when wanting to prevent, treat, and reverse chronic diseases.

This means that conventional medicine is not the best approach to treating depression, autoimmune disease, diabetes, arthritis, gut dysfunctions or any other chronic condition.

More than ever, it's important to understand Conventional Medicine’s inherent incompetence when it comes to addressing chronic disease.

Despite all the advancements in medicine today, we are in the midst of the worst chronic disease epidemic in human history.

Let’s take a look at the unhealthy reality of today:

If these numbers don't shock you, it’s because poor health and chronic disease has become so widespread that it’s been normalized. And that is alarming!

This is the first time in modern history that our lifespans are decreasing and unfortunately, it’s almost certain that things will get worse before they get better. [6]

We currently have the first generation of kids in modern history with expected shorter lifespans than their parents.

If you currently understand how expensive healthcare is today, imagine what the costs will be for your children!

The cost of diabetes alone is $250 billion a year and this disease is set for exponential growth worldwide.

To put that into perspective, the World Health Organization estimates that the cost of ending world hunger – ending it! – is $30 billion per year.

We should be reversing and preventing chronic disease, while doing minimal harm – not simply treating it.

And all the statistics that I’ve mentioned show that we’re doing the exact opposite.

The ineffectiveness and outright danger of treatment itself is horrifying.

Studies in The British Medical Journal, the Journal of American Medical Association, and John Hopkins all suggest that medical care and treatment is the third leading cause of death! [7, 8, 9]

These studies have found that medical errors are responsible for 200,000 deaths, $77 billion in extra costs, 8 million hospitalizations, and 77 million extra drug prescriptions.

I think it's pretty safe to say that chronic disease is currently out of control and modern medicine has no answers.

There are dozens of reasons why conventional medicine is failing to address chronic disease, but it all really comes down to two fundamental issues.

Conventional Medicine operates on the wrong paradigm for health. While conventional medicine is great for addressing urgent matters such as infections, blunt force trauma and accidents, it's not equipped to address chronic disease.

Conventional medicine was birthed from an era when infectious disease was the leading cause of death.

Acute conditions such as appendicitis, gall bladder attacks, open wounds and bacterial or viral infections were the primary reasons why people looked to medicine.

The treatments in these cases were pretty simple. The patient had an infection or pain, and the doctor had an antibiotic or pain relieving medication to treat it. The patient either got better or they died.

In short, there was one problem, one doctor and one treatment.

But today's healthcare problems are far more complex. The average patient doesn't go to the doctor for a simple problem.

Unfortunately, many doctors still try to operate on this old one patient, one condition, one treatment paradigm.

The paradigm of suppressing symptoms with drugs rather than addressing the root cause of a health problem is the reason why conventional medicine is failing.

For example, if you go to a doctor with high blood pressure or high cholesterol, you'll be given a drug to lower it.

Worse, you'll be expected to take this medication for the rest of your life and no clear path as to why this condition developed in the first place will ever be brought up.

It's clear that this approach is not the best way to prevent or reverse chronic disease.

Recent statistics suggest that more than 85% of chronic disease is caused by environmental factors such as diet, behavior, environmental toxins and lifestyle. [10]

But how many times will a doctor take the time to investigate a patients diet, health behaviors, toxicity load and lifestyle?

They almost never do and when they do, they simply say things like, “You should eat better and exercise more.”

In 1980 only 1% of the Chinese population had diabetes and in one generation, the incidence of diabetes rose by an astounding 1,160 percent! [11]

Did the Chinese genetic pool of a sudden change within 30 years causing an outbreak of diabetes?

I don't think so. Genetic changes take a lot longer to have such a dramatic impact. But if you look at how much of a change diet and lifestyle occurred within this time period, it becomes obvious what is happening.

If we want to prevent and reverse chronic disease, we need a medical paradigm that operates on a foundation of:

Conventional Medicine is Outdated in its Delivery

The Current Model of Healthcare Delivery is Outdated Given the fact that chronic disease is complex and requires deep investigation into the underlying causes, the current convetional model of 10-15 minute visits is inappropriate.

The second reason why conventional medicine is failing at addressing chronic disease is because the model of delivery is outdated.

The primary causes of chronic health conditions involve a combination of genetics, lifestyle and behavior patterns and environment.

We are not suffering due to bad genes or bad luck. We are suffering from the wrong choices about diet, physical activity, sleep, stress management and so much more.

In this case, the conventional medical model is not setup to address such complex factors that contribute to ill health.

With the average patient visit with a primary care provider only lasting 10 to 15 minutes, how could we expect any long lasting change to occur?

If a patient has multiple conditions, on several medications and presents with new symptoms, it's nearly impossible to provide adequate care within a 15 minute window.

There's barely enough time during a visit to review the current set of medications and symptoms, much less have a very necessary and detailed discussion of diet and lifestyle factors that are contributing to their problem.

Even if the doctor brings up diet or lifestyle, how successful will the patient be at executing it?

It's well understood that knowledge is not enough to change behavior.

The reality is, patients need a lot more support in order to make long lasting changes than simply being told they should eat healthy and exercise more.

To truly address the chronic diseases we're suffering from, we need a completely different model of care.

A few things this model would consist of:

Functional Medicine is the Future of Healthcare

Functional Medicine is the Future of Health, Available Today. The good news for patients and those suffering from chronic disease is that a better model of healthcare delivery is already available.

If you're suffering from a chronic health condition and you feel that there's something missing that conventional medicine has missed, contact a Functional Medicine doctor today.

Functional Medicine was born out of the need to modernize healthcare as it's currently being delivered.

It's obvious that a paradigm shift is desperately needed in order to turn this sickness care system into one that actually supports health.

Functional Medicine doctors and practitioners are out there, ready to empower you to help changes the future of healthcare delivery by taking health into your own hands and standing up for all the things that are right for you.