Normal Blood Test Results is Not the Same as Optimal

This article applies to almost anyone who's ever had blood-work ordered by a doctor.

One of the first questions I ask any patient is whether or not they've had blood work or any lab testing done and close to 99% of the responses I get are:

“Oh I’ve already had blood testing done and everything was normal.”

Yet, when I evaluate the results myself, they are far from “normal”.

Normal blood test results are not the same as Optimal!

In This Article:
Add a header to begin generating the table of contents

The image above pretty much says it all when someone is obviously not feeling well yet they're told everything is fine.

Unfortunately this is the experience of millions of people, every day.

This is a major difference between conventional medical diagnosis and functional medicine.

It's also important to remember that even when modern medicine gets it right, they literally have nothing to help the millions of people suffering from these signs and symptoms because their primary treatment is either Drugs or Surgery.

For example… have you ever seen someone who is happy, rejuvenated, full of energy and completely at peace with themselves who was also carrying around a bag of medications?

If you were to take an Olympic athlete and pump them full of drugs, would they get healthier?

It's biologically impossible to to throw drugs at someone and expect them to get “healthier”.

Drugs can change symptoms; but they certainly don't heal the body.

Anyone who's ever looked at a laboratory or blood chemistry report can understand that its designed to be deliberately obscure.

It is a long list of names, mostly of things you've never heard of, followed by a long list of numbers, an occasional H or L, the reference range and then obscure units.

Nothing about this provides meaning to you, the patient; other than “H” for High and “L” for Low.

Thousands and thousands of these reports are handed to people every day.

Tons and tons of patient data are amassed and codified in these reports. Though these data can guide and direct our personal health journey, most of the meaning suggested by the data is unfortunately lost.

The issue is certainly not the lack of data (the average laboratory test has 67 biomarkers on it), but rather the absence of a method powerful enough to tease-out the meaning entrapped within the numbers.

Receiving a lab test result like this with perhaps a few hand written notes on it does not extract the full value, the real meaning contained within the data.

No wonder the most common response a patient hears from the physician who is going through the lab with them is “Everything looks normal”!

Why Normal Blood Test Results are a Problem

It's important to understand that the laboratory results most doctors use to evaluate blood chemistry data is based on a population average.

Whether results are flagged as problematic, high or low is entirely dependent on the “normal values” of a population.

It's not based on the optimal physiological ranges of health, age or sex.

The “normal” range is based on statistics and not on whether a certain value represents good health or optimal function.

When conventional medical physicians review your blood test results, their only concern is when a particular result is outside the “normal” reference range because values outside of the normal range help them identify and diagnose disease states, tissue changes, and pathology.

Because they are based on statistics, the “normal” reference values tend to change from year to year depending upon the prevalence of disease in the general population.

As our population becomes more dysfunctional and obese and suffers from more cardiovascular disease, the “normal” reference range gets wider and wider.

Yep… it's kind of silly.

This leaves a larger number of the population testing in a range that is considered “normal.”

Normal ranges also vary from state to state. What might be normal in Virginia may be abnormal in California.

The problem is that “normal” reference ranges usually represent “average” populations, rather than the optimal level required to maintain good health.

Once again, “Normal” does not mean optimal.

What you need to know is that most “normal” reference ranges are too broad to accurately detect health problems before they become pathology and are not useful for detecting dysfunction.

So, when your doctor finally tells you that your labs are abnormal, it's too late and you're already diseased.

But If pathology is not present, you're considered “healthy.”

The problem with this Black or White way of thinking is that you never truly prevent anything. You either show up with disease or not.

What you really want is “optimal” health as opposed to “normal” health.

The functional approach to blood chemistry centers around changes in physiology and not pathology.

A Functional medicine doctor will use ranges that are based on optimal physiology and not the “normal” population.

This is why Functional Medicine doctors discover so much more about your health than traditional doctors.

The analysis that functional medicine doctors perform on blood test results yield a tighter “Functional Physiological Range”, which allows us to evaluate the gray area in the above image that’s within the “Normal” range that to me tells me that something is not quite right in the physiological systems associated with this biomarker.

So we increase our ability to detect patients with changes in physiological “function”.

More important is the fact that we can begin intervention whether its nutritional support, organ system support or recommendations for further testing.

This process allows me to identify the factors that obstruct you from achieving optimal physiological, biochemical, and metabolic functioning in their body. 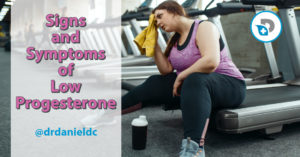 Signs and Symptoms of Low Progesterone

Most Doctors Won't Ever Order the Right Lab Tests

How to Optimize Vitamin D Levels